Thursday started as a good day. After a slow start to the day, the stock market was staging a nice rally as investors figured one rate cut was better than no rate cuts. Both Treasury bonds and high yield bonds were sharply higher (which isn’t usually the case, especially on the same day.) I had several conference calls to discuss our economic outlook and our positioning. In each one I commented how the market seemed to be reassured of the Fed’s ability to handle this “mid-cycle slowdown”. I then stepped out for lunch (a rare occurrence) with our pastor. He even commented on the nice day the market was having.

I returned from lunch and unlocked the trading computer and saw a sea of red numbers. I thought it had a bad data feed, so I flipped on Bloomberg. All red. Same with Yahoo & Google Finance. My first comment to Cody was, “what did the President do now?” I was half joking, but also have dealt with this type of volatility the last 18 months to realize he was probably the culprit. It made me think of this: 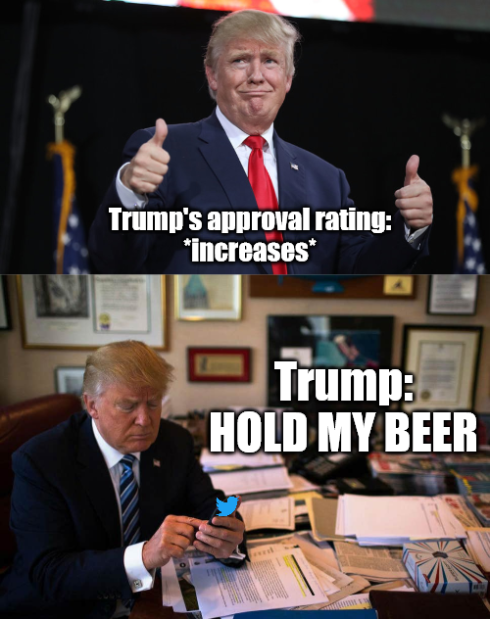 While Dustin whipped up the meme, I updated my chart showing the volatility our president has created with the on-going Trade War with China (updated to show the impact of China’s retaliation on Monday.)

We need to fully expect this to continue, which emphasizes the need for an unemotional strategy to deal with a climate that is highly emotional and will continue to be that way through at least the 2020 elections. The President doubled down on his Tweet Thursday night at a campaign rally saying he was going to “tax the hell out of China until we get a deal.” Stocks fell again on Friday.

On Monday, China fired some shots at the President at two hot button areas. First they let their currency fall significantly and broke a barrier they had previously been supporting. (Countries can devalue their currency to make their goods cheaper in other countries, something the President has been calling China out on since at least 2010 before he was even considering a run for the White House.) They also announced the halting of all state purchases of US agricultural products immediately. They know the President won the election thanks to the support of middle America, a region still highly dependent on agriculture.

Before we call it a day, please remember I’m not bashing the President or this trade war. He’s the only one with the guts the last 40 years to call out what are serious STRUCTURAL issues. Who am I to criticize his tactics? We won’t know until true trade reform is implemented and we’ve had YEARS to study the impact it had on our long-term economic trajectory. The problem is the MARKET (and voters) judge the president by the SHORT-TERM when this is a LONG-TERM problem that will take painful solutions to solve. I’ve written quite a bit about the necessity of the Trade War. The most recent posts were here and here.

Secondly, remember the data says the economy is grinding to a halt and the Fed’s rate cut is unlikely to stop it. Stocks historically lose 35-50% just before and during a recession. Check out my quick take on the Fed’s rate cut here.

Finally, even though the data says we need trade reform, any type of STRUCTURAL solution will cause major damage to the economy over the short and intermediate-term. In particular we are likely to see MAJOR issues in the Investment Grade Bond market. Click here for what the data says and steps you can take to prepare.

In summary, while the rally Thursday morning was nice while it lasted, we should expect many more down days in the years ahead while the economy adjusts to the current reality. This isn’t the president’s or the Fed’s or really anybody’s fault. Markets and economies go up far too much and then end up going down far more than most are prepared for. This also doesn’t mean we won’t see some nice rallies in the days, weeks, and months ahead. The key is having a plan to navigate whatever it is the market throws our way.

[Note: Monday afternoon our high yield bond trend following system triggered a “sell” leading to a reduction of nearly all of our high yield exposure. We also saw sells on Friday and Monday in several of our tactical systems in Enhanced Growth Allocator. There are signs we could get a snap-back rally, but the tone and underlying strength of the market has shifted according to most of our tactical systems.]

About Jeff Hybiak, CFA
New Kent, VA
Jeff joined SEM in October 1998. Outside of SEM, Jeff is part of the worship team at LifePointe Christian Church where he plays the keyboard and bass guitar. He also coaches a club soccer team.
Previous Post : Still Slowing   Next Post : A Horrible Track Record