Is the Fed too late (again)?

On Tuesday, stocks posted their best single day jump since December. Earlier in the day, the financial media attributed it to a Chinese official saying the trade dispute with the US should be resolved with “talks”, not retaliatory tariffs. Later in the afternoon, the media said the rally was the result of Fed Chairman Jerome Powell’s comments during a speech at a research conference:

“We are closely monitoring the implications of these developments for the U.S. economic outlook and, as always, we will act as appropriate to sustain the expansion, with a strong labor market and inflation near our symmetric 2% objective.”

“We will put in place policies that not only achieve but sustain price stability and maximum employment, and we’ll do that if we need to.”

Markets ignored both Fed leaders’ later comments discussing how it was “too early” to act and their moves would not be dictated by stock market movements. I’ve watched the daily market action for 25 years now yet I’m still fascinated how myopic “investors” can be when it comes to their assessment of risks and potential returns. In the 100 year history of the Fed they have only engineered two “soft landings” (1984 & 1994). A “soft landing” is when the Fed raises interest rates back to “neutral” after a rate-cutting campaign without causing a recession.

In all 11 post-WWII recessions the Fed has tightened rates just before they happened. In all of the cases they were cutting rates when the recession started or shortly thereafter.

What people do not understand (including the Fed for some odd reason) is it takes 9-15 months for the impact of a rate cut (or hike) to fully cycle through the economy. They are “data dependent”, but with the lag in rate change impacts what data are they supposed to use?

Whether it is a resolution of the trade war or a rate cut from the Fed, our economic model would argue it could be too late to save the economy from a recession. After updating our model through May it is clear the rate of growth is decelerating rapidly. Here is a chart illustrating our economic outlook with a new feature showing how our “dynamic” investment models adjust based on this data. 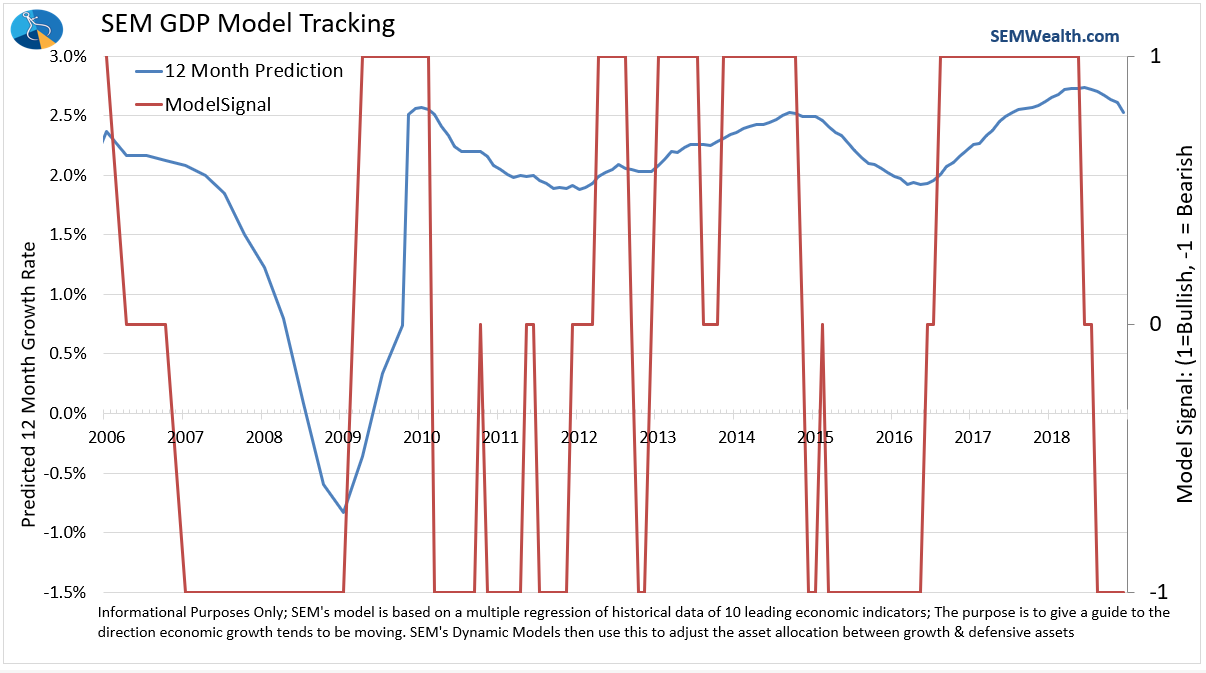 Remember, this is a QUANTITATIVE economic model I began working on in 1995. At the time I was frustrated with the fact other economic models, such as the Leading Economic Indicators, would not signal a recession until 9 to 12 months AFTER the recession had already started. I set out to find indicators that would give us a better idea BEFORE the recession started. In 2001 when the Federal Reserve Economic Database (FRED) went fully online I was able to fully test & mechanize the model.

The economic model went “neutral” in November & “bearish” in February. It remains in that position. What this means is our Dynamic models reduced risky asset exposure such as small caps in our Dynamic Aggressive Growth (DAG) model in November and completely eliminated them in February. Our Dynamic Income Allocation (DIA), reduced dividend growth stock exposure in November and completely eliminated it in February. These models are great diversifies for nearly all portfolios. They provide common-sense changes to the asset allocation based on the economic trends and are completely different than our more tactical models.

Digging inside the model, building permits are declining rapidly, & manufacturing appears to be grinding to a halt. The order backlog is already signaling a recession and New Orders & Supplier Deliveries are teetering close to a recession signal. I have a hard time seeing how a rate cut would turn this trend around in the near future. 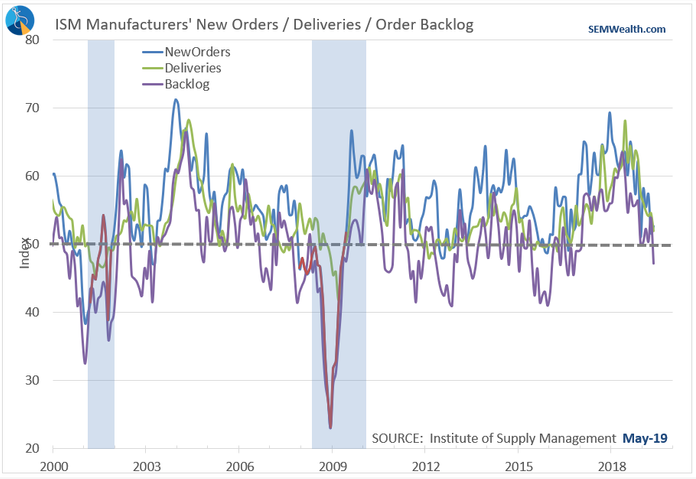 I want to circle back to another chart from David Rosenberg courtesy of CMG Wealth (one of our “Platinum” managers). In it David showed the Fed funds rate (the only interest rate the Fed controls) and pointed out past financial crises that occurred following past Fed rate increases. 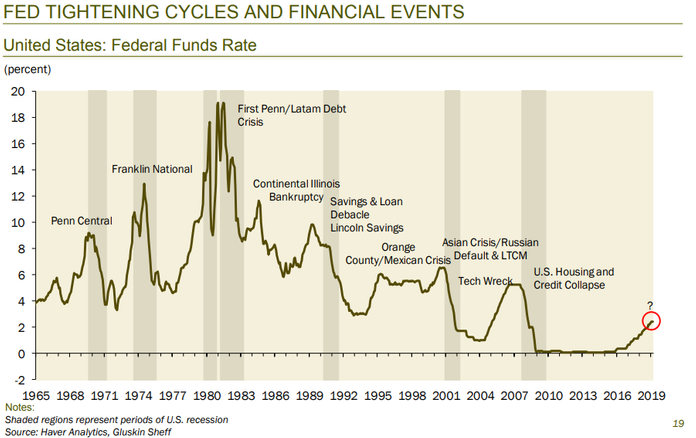 The Fed has a long history of cutting rates too far for too long and then raising rates too high for too long. They simply do not have the data to see how their actions are impacting the financial system until it is too late.

Yesterday Pimco warned liquidity in the corporate bond market is drying up. UBS warned of the same problems a few days ago. Pimco said, “this isn’t going away anytime soon.” The liquidity crunch will create more volatility which could lead to even more problems in an already over-leveraged market, according to Pimco’s managers.

This could cause major issues for insurance companies and pension funds. For a deep dive into the investment grade bond market check out last week’s blog including a link to a client approved white paper.

The most common response from advisors and clients alike after reading our “Investment Grade Junk” article and white paper is, “surely the Fed won’t let this happen.”

My response is always the same:

I’m confident the Fed will pull out all the stops AFTER the carnage has already started. Are you willing to risk they will be able to prevent defaults and losses for the first time in their 100-year history? I’m not willing to take on those kinds of risks, which is why we are monitoring the financial markets EVERY DAY on behalf of our clients and advisors.

Jeff is a CFA charterholder and received his Bachelor of Science degree in Business Administration (Finance & Accounting emphasis) from the University of Northern Colorado, where he was a member of the Financial Management Association National Honor Society.  He has worked in the field of accounting and finance since 1992.  Jeff was one of the minority of advisors warning about the looming financial crisis. SEM first warned about the upcoming recession in December 2006. In addition to helping his clients successfully navigate the dot-com bubble bursting, his piece, The Pending Forest Fire was widely criticized as ‘doom & gloom’ marketing by advisors throughout 2007 and early 2008. Instead it correctly predicted how easily the crisis could spread due to the bubble cycles created by the Federal Reserve. Prior to joining SEM, Jeff served as a Fund Manager/Analyst for the UNC Alumni Foundation Fund, a balanced portfolio consisting of equity, fixed income, and cash securities.  He joined SEM in October 1998.

About Jeff Hybiak, CFA
New Kent, VA
Jeff joined SEM in October 1998. Outside of SEM, Jeff is part of the worship team at LifePointe Christian Church where he plays the keyboard and bass guitar. He also coaches a club soccer team.
Previous Post : Avoiding Large Losses   Next Post : The Debt to Equity Swap