Only 3 Places to Cut

This week it was announced the current Federal Government Budget Deficit hit its highest level in 6 years. The combination of tax cuts, slower than expected economic growth, and increased spending accelerated the budget deficit at a rate alarming enough to lead even Republicans to call for cuts in spending. This breaks the trend the last 20 years where spending was acceptable and necessary if your party controlled the White House and outrageous and a threat to our future if your party did not control the White House.

Senate Majority Leader Mitch McConnell has been blasted from both sides of the political spectrum when he suggested the only way to meaningful progress on the deficit would be to look at cuts to Social Security & Medicare. The attacks were familiar depending on the political affiliation of the person criticizing the audacity of touching these sacred cows — we should cut wasteful spending (including citing Congressional salaries and benefits). Senator McConnell finally seems to understand what I’ve been warning anybody who would listen above for the last 20 years — the easy solutions (cutting wasteful spending and gradually increasing FICA taxes while reducing Social Security & Medicare benefits) are long past.

Pensions (most of which is Social Security), Health Care (most of which is Medicare), and Defense are the 3 largest spending categories. With our growing deficit we need to borrow money from others. Interest expense is now the 4th highest spending category. The worse the deficit is, the more we will pay for interest. Just those 4 categories eat-up more than we are taking in from tax revenue. In other words, we could cut ALL OTHER SPENDING (whether “wasteful” or not) and still have a budget deficit.

[In the chart below, if the dashed line is above the shaded lines there was extra money after covering Pensions, Health Care, Defense, & Interest. If the dashed line was below we were already running a deficit before paying for anything else besides those 4 categories.] 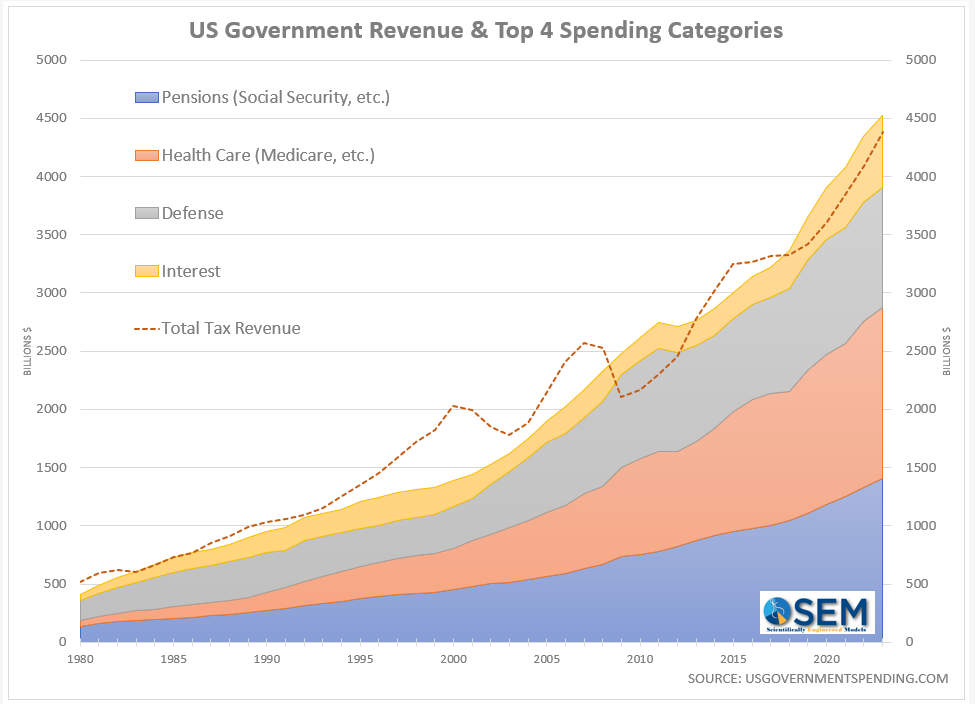 What should be more frightening in the estimates above (where tax revenue skyrockets higher) assume 3.1% GDP growth indefinitely with NO RECESSIONS. We are already approaching the 10 year anniversary of the current economic expansion. Logic and a study of simple economics would tell us it would be a miraculous feat to not have a recession before 2023. Notice the steep drop in tax revenue during the last two recessions. This would make the budget deficit much worse than projected.

Our money is not just sitting there. Back in the late 1970s Congress decided to use that “extra” money as part of their current budget. It went from a recessionary fighting stop-gap measure to an economic stimulus throughout the 1980s and 1990s. As the money came in, it meant they didn’t have to borrow as much money to support the ever increasing spending from the government. Now that the tables have shifted and more money is going out than coming in, the government has to borrow even more money to pay back the Social Security & Medicare money they used the last 35+ years.

There are no easy answers left. The numbers do not lie. We all need to stop blasting any politician who dares mentioning possible cuts to Social Security, Medicare, or Defense and instead start working with those politicians who are brave enough to bring it up. If we keep ignoring this growing problem and worse only electing politicians who are also ignoring the problems, it’s going to get VERY ugly in the next 10 years when we have no choice but to slash benefits being paid due to a lack of funds.

About Jeff Hybiak, CFA
New Kent, VA
Jeff joined SEM in October 1998. Outside of SEM, Jeff is part of the worship team at LifePointe Christian Church where he plays the keyboard and bass guitar. He also coaches a club soccer team.
Previous Post : Advisor Perspectives: Lessons from a Storm   Next Post : Nothing Lasts Forever