After 25 years of following the financial markets every day, you’d think I’d grow used to the sensationalized headlines of every single market move and every single economic data point. Today the financial media was reminding us that the ISM Manufacturing data released this morning showed the worst reading in 10 years. The components of this data series are a part of our economic model, but the number being reported is not. However, I do watch this number each month.

Yes technically this number is the worst we’ve seen in 10 years…….barely surpassing the 48 reading in December 2015 and the 48.8 measured in November 2012. This week’s Chart of the Week does help put it in perspective far better than the headlines scrolling across our tvs, phones, and internet browsers. 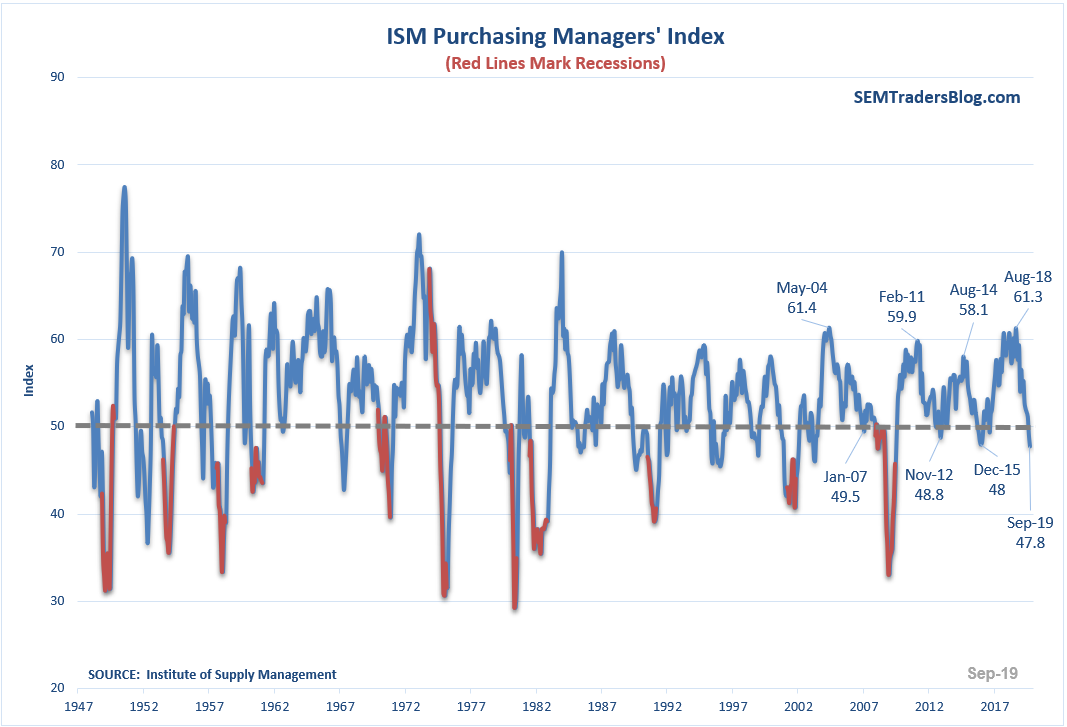 I can’t help but notice the dates of the false readings from this indicator. With hindsight the “worst readings” ended up being the bottom in the economic slowdown as well as for the stock market. (More on that below)

Don’t get me wrong, the slowdown in manufacturing is a concerns, but regular readers already knew we were in the midst of a rapidly slowing economy. The components of the Manufacturer’s Index are trying to stabilize, but are still weak. 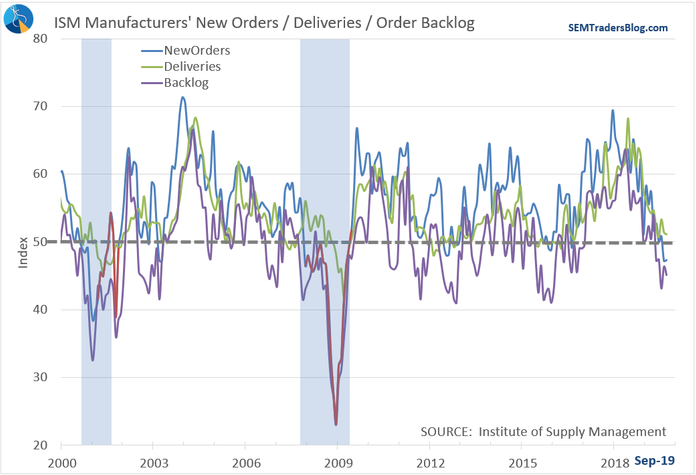 As it has all year, our economic model remains bearish. I was hopeful the stabilization last month might turn into a more neutral signal as we quick off the 4th quarter, but the drop in manufacturing seems to have kicked our model back near the lows. All that means our dynamic models remain defensively positioned. 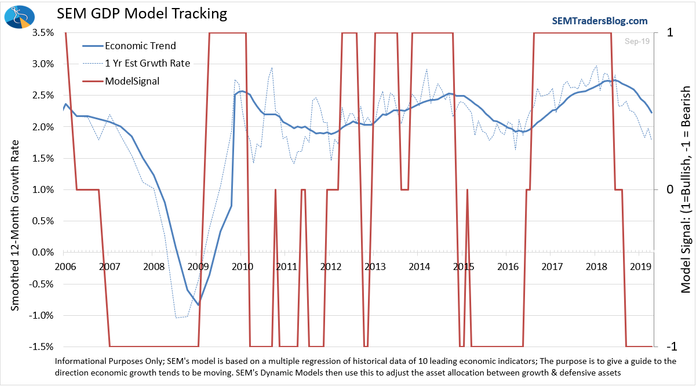 What about SEM’s other models?

AmeriGuard, which does not use our economic model, but a rotation to strength strategy increased equity exposure slightly across the board. This was due to the recent weakness in the bond market (positions that helped us nicely last quarter). All AmeriGuard models took the proceeds from the bond reduction and allocated it to Large Cap Value.

Finally, our tactical models are split. Enhanced Growth Allocator’s “price divergence” trading systems continue to not like the “breadth” or underlying technical readings behind the recent rally. It remains well less than 50% invested. Tactical Bond and Income Allocator are invested in some lower risk high yield bond funds, but are leaning towards a sell signal as well. Once again you can see the value of our 3 strategy approach — Strategic allocations (AmeriGuard) for longer-term models are mostly fully invested, our Dynamic allocation models remain bearish and have kicked the riskiest assets to the curb for most of the year, and our tactical models are either already playing defense or ready to do so.

This following is 100% my subjective opinion and has NOTHING to do with how our models will be managed — looking at the current environment, I think there is a chance we could be near the end of this economic slowdown. The rally in the bond market last quarter could be put in the “crazy things you see near a major shift” category, but it also was an example of sentiment maybe not being crazy enough to say the bull market is finally over. In addition, I think it is very possible President Trump agrees to a positive in headline only trade agreement with China to help bolster the stock market (his favorite approval rating indicator) and maybe stop the slowdown in the economy (temporarily). Finally, maybe just maybe we are finally entering a time where value could be ready to outperform growth.

Don’t hold me to any of that. We could easily see the economy head into recession, which could lead to a huge collapse in stock prices and higher risk bonds. The evidence still points to very high risk of recession, which means if you bet on the things I mentioned in the prior paragraph you could be in for a world of hurt.

The nice thing for us, our advisors, and our clients is we don’t have to make a bet on which direction things will go. We’ll keep doing what we’ve done the last 27+ years — follow the models and adjust allocations as they dictate. No opinions, no sensationalization, only facts.

About Jeff Hybiak, CFA
New Kent, VA
Jeff joined SEM in October 1998. Outside of SEM, Jeff is part of the worship team at LifePointe Christian Church where he plays the keyboard and bass guitar. He also coaches a club soccer team.
Previous Post : Your Starting Point Matters   Next Post : 3rd Quarter 2019 - Fall Newsletter