The stock market is capable of ignoring a lot of things. Since the economy began to re-open it has made a huge move higher. This is despite the fact the STRUCTURAL damage done by the economic shutdown has pushed the weak businesses and consumers over the ledge. This was bound to happen during the next recession, regardless of the cause. Too many consumers did not have enough savings and too many businesses relied on debt to fund their current cash flow needs. (Click here for our latest economic update)

The stock market has also completely ignored the growing tension and violence in our country since the murder of George Floyd by Minneapolis police officers a week and a half ago. This is an emotional time for all of us. We've already seen how our own personal biases are impacting our opinions and actions with COVID-19 (click here for Cody's excellent look at some biases we are all prone to as humans). I shared my own emotions in this week's Monday Morning Musings. 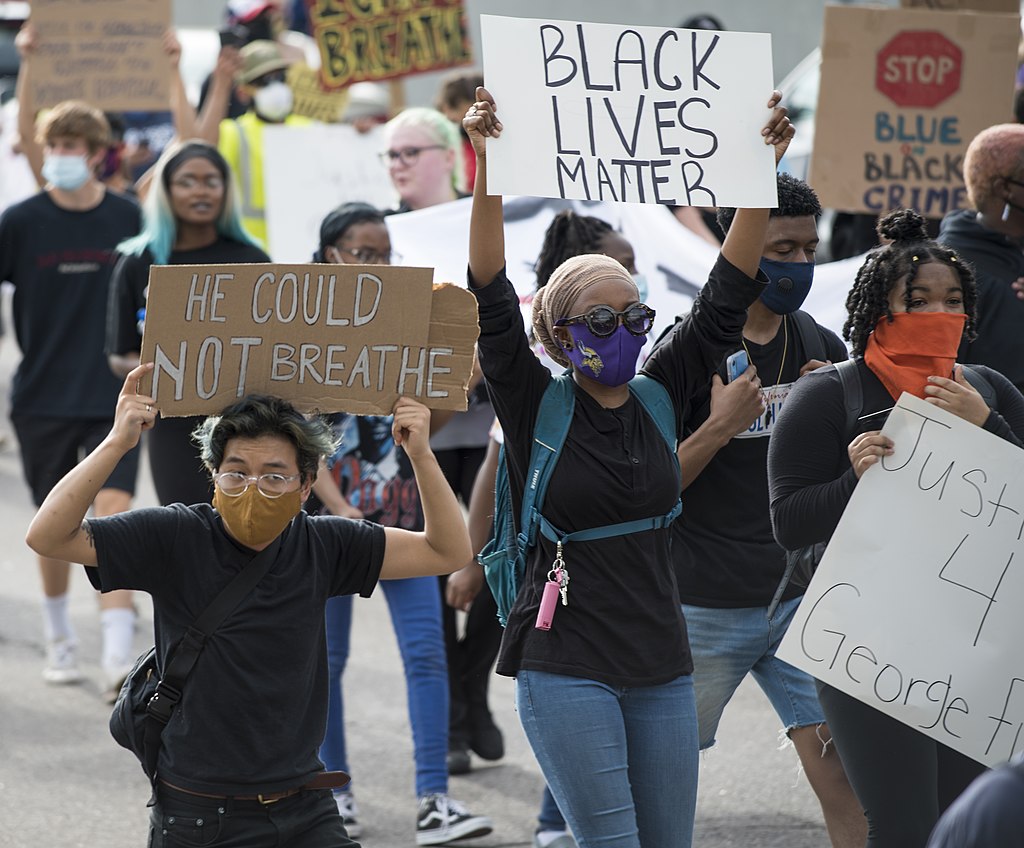 As somebody who strives to make decisions and base my opinions on data, I've spent a lot of time this week looking at many different points of view. Our country clearly has a race problem. We've had one for a long time. We've had some violent periods that led to some improvement, but the data I see still shows we have problems. Big problems.

For over a decade I've talked about the Social Cycle and the coming crisis. My most popular post on the topic was "The Consequences of Political Polarization". I noted how we should expect violent protests and clashes as we work through this final stage. The cycle typically lasts 80-90 years. The current cycle started in the 1940s after World War II. In the middle of the cycle you always have an "awakening" period. This was the 60s and 70s. During that time, the young adult ideological generation rallied against their parents and grandparents and demanded "equality" and "justice". They were born during the rebuilding process so don't remember the hardships and have a different point of view than their parents and grandparents. Things were good on the surface, but they say ways to make our country better. There was violence, there was division, but changes were made and our country tried to move forward.

The problem is in the next phase of the cycle (the "unraveling"), the same people who demanded outward-driven "justice" and "equality" become more inner-driven. As they took over businesses and government they pushed their own ideological beliefs into our culture. We ended up with a mixture of far left and far right cycles that ended up creating a large gap and growing tensions for the rest of the country.

As the younger generations became young adults in the final phase of the cycle (the "crisis"), they started to see the large groups who were left out by the ideological policies of the far left and far right and they began to become more active. Both the Tea Party & Occupy Wall Street movements were the beginning of this part of the cycle. While they came from the opposite sides of the political spectrum, both sides were rising up against the inequalities created from the establishment's answers to the financial crisis. Based on history, those movements will look small compared to what is still to come.

This is the ugliest and most dangerous part of the cycle. In addition to occurring during the Great Depression and WWII, this cycle led to both the Revolutionary War and the Civil War. You can also trace the cycle back to the uprising that led to the early US settlers leaving England, France, and Spain. In all cases the older, ideological leaders were pushing their own agendas and the younger generations rose up and forced changes that tore down many of the things that created the divergences in the society. I'm certainly not condoning the violence, but know our history is filled with periods where the large disconnect led to violence.

In all cases, there was a large economic gap that led to the civil discontent. We saw a large and increasing class of citizens feeling left behind. I've talked about that several times. The most recent are here and here. In both of those articles I discussed how the Wall Street cultural shift from maximizing STAKEHOLDER values to just maximizing SHAREHOLDER values has alienated more and more people. The profits simply have not trickled back down to the average American. Here is an updated chart I used to illustrate this.

Notice how in the 1980s the trends in corporate profits and personal income were essentially the same. Then in the 1990s we saw the boom/bust cycle of profits lead to corporate shareholders and executives getting wealthy while the rest of America plodded along. Making things worse, Americans saw corporations bailed out by Congress and Federal Reserve policies during the past two recessions. This has created a large chasm between the working class and the rest of the country. As you can see this is not a Republican vs. Democrat thing. It's just the cultural shift that we saw in the 1990s.

As a side-note, one of the reasons we are so passionate about our Cornerstone Models is each of our fund partners has a mandate to only invest in companies who are good corporate citizens. This includes having a STAKEHOLDER focus as illustrated by our partner Eventide. Shareholders are still important, but so are others.

If you've been longing to make a difference in our country, the Cornerstone models are a great place to start. I love that our investments can be working behind the scenes to make the world a better place.

Back to the topic at hand -— If we look deeper at personal income in our country, there is a clear racial divide in income levels. Going back to the "awakening" in the 1970s, white Americans made 82% more than black Americans. Today the gap is still a glaring 70%.

Knowing what I know about the Social Cycle, I believe the violence we are seeing is a symptom of a much bigger problem. My conversations and research confirms this. Again, I'm not condoning the violence, simply pointing out why it is happening.

Looking further into the data, your level of education plays a huge role in whether or not you end up in poverty.

Your race makes a difference in your level of education. The latest comprehensive study of graduation data shows just 59% of black males received a high school diploma within 6 years of starting high school. This compares to 80% of white males. Studies have shown if you do not graduate high school there is a very high likelihood you will end up in prison or dead within 5 years. In addition, domestic violence, children born out of wedlock, and drug abuse all go up if you don't finish high school.

There are no easy answers, but this is one area we as a country need to figure out how to solve. At SEM we've worked with our local communities and schools, but those are predominately white, middle-class communities. We need to do more. We can't demand our Cornerstone fund partners invest in companies who are good corporate citizens without being good corporate citizens ourselves. We cannot focus on only white middle to upper class communities any longer.

The fact of the matter is if you're white, in a middle class family, have at least one parent who is a college graduate, or live in the suburbs you have a much greater chance of success. The more of those things you have going for you, the more likely you are to be successful. It doesn't mean you don't have to work hard. Success doesn't come easy, but it does come easier if you have those things in your favor.

I'm a huge believer in our country and have confidence we will figure this out. We are still the greatest country in the world. Our history has some bruises, but throughout each of the cycles we came out much better on the other side and set-up a period of even greater prosperity. The American spirit will prevail. We just need to get through this cycle. The more we work together, the faster this will happen. I heard somebody say, "both the left and the right wings are on the same eagle." This isn't about party politics, it's about moving our country forward.

I won't pretend to be the expert on what all needs to be done. I'm not talking socialism as the answer, but long-term commitments to change our culture and remove the obstacle skin color has on being successful. It comes down to the "give a man a fish....." cliche. We don't need to just give money away. This creates long-term costs to the economy that will hurt everybody.

I don't have the skills to figure this out, but we do have a platform with connections to other advisors. We are happy to be partnering with We Are Connect-Ed to help them build stronger communities in the locations they are located.

What that looks like is still to be determined, but I want to be held accountable. We can't fix this huge divide with words and we certainly can't fix it overnight. We need to address all kinds of gaps and issues and that will require persistence, both time and financial resources, and patience. I want my grandchildren to be filled with pride when they ask me what I did to help fix the racial divide we faced in the 2020s.

If you'd like to partner with us as we work on programs to change our country, please let me know in the Comments section below.

[By the way, from an investment management position, none of these data points or opinions/interpretations impact how we invest our money. We are a data-driven, quantitatively managed investment firm. If the models say to buy, we buy. These issues are likely to impact the economy and thus the market severely at some point. We trust our models to do what they've always done – move to more defensive positions when the data dictates we do so.]

About Jeff Hybiak, CFA
New Kent, VA
Jeff joined SEM in October 1998. Outside of SEM, Jeff is part of the worship team at LifePointe Christian Church where he plays the keyboard and bass guitar. He also coaches a club soccer team.
Previous Post : Payroll, the Economy, and Social Activism - MMM Week 13   Next Post : The Value of SEM's Behavioral Approach in Uncertain Times